End the year with a bang at the Parkes Harness Racing Club tonight, as the club conducts its final race for the 2021 Season - complete with fireworks, top class racing and plenty to keep the punters entertained off the track

The massive fireworks display will take place approximately 45 minutes after the last race, to allow horses to be off the track.

This will likely be between 11pm and 11.30pm - but wait for further announcement during the night for when it will begin.

Heading to the track? Here's what you might need to know if you are keen to have a punt on the amazing racing that will be on display.

We kick off the evening with a very open race that is going to be a nightmare for punters. A pair of Nathan Hurst (Gabbys Reason[$2.50] and Eagle Commander[$3.25]) runners will likely start at the top of the market, but looking towards Scaramucci ($15) for a bit of value. The Greg Rue gelding will likely try to burn forward from the outside as soon as the arms fold back, and if he finds a good position, should present great value at the current quote. DANGER: Eagle Commander will be one to watch in the first race of the night. Photo: KRISTY WILLIAMS.

A race for the 2YOs, this will be another tough one to pick given the lack of race time for many of the runners. Laurie Dee ($2) has been well-supported since the markets opened, and has been performing solidly in Bathurst this month, with a runner-up, two thirds and a fourth in the gelding's last three starts. Be hard to bet against him with Bernie Hewitt in the gig. Keen to see what Tackas Last Dance ($34), a Rocknroll Dance x Seville Lady filly, can do - she's been well-backed too and is owned by Forbes Harness Racing Club royalty.

Another of the distance affairs for the night, I like Nathan Hurst's Tulhurst Dancer($8) in this one. Hurst runners always perform solidly in Parkes, and the filly is fresh off an impressive win in Tamworth at 1:58.0 two starts back. Grenfell runner Rock Queen ($4) keeps racking up the minor placings for Mark Hewitt since opening her career with two wins in a row and is always thereabouts. Gracenava($8.50) has scored the plum draw and should have a decent run if she holds out Party Hat ($67) at the start. 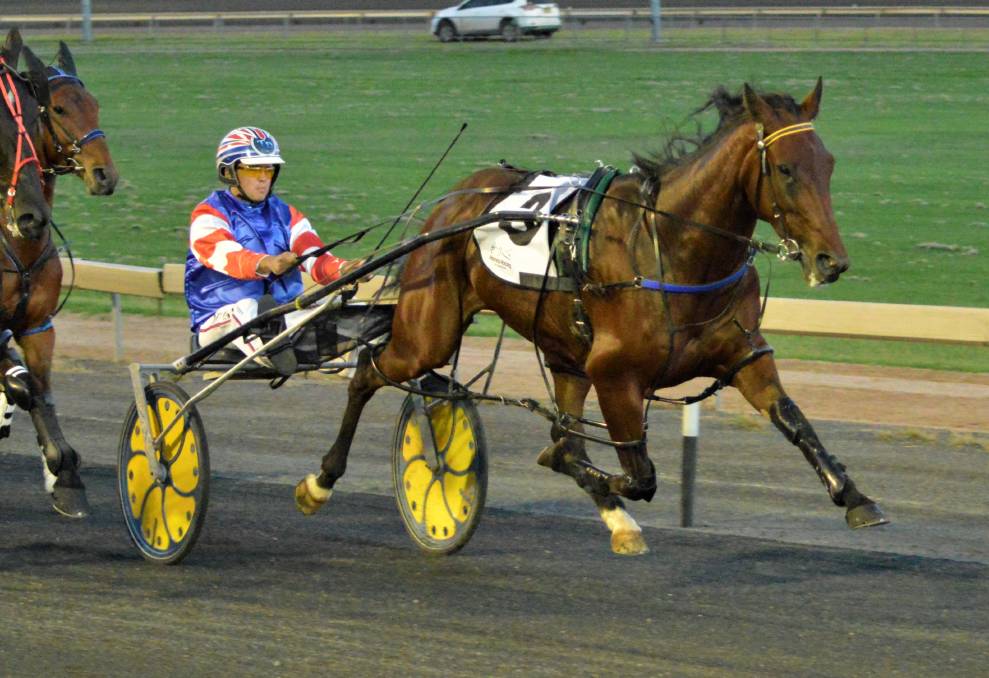 They'll be vying for a $500 trophy and a rug in this one, for local runners with two wins or less. Former Young horse, Clownstotheleft($1.70), has switched to the Townsend stable and at her best the mare will be too good for this lot. Forbes trainer Adam Bellach has the consistent Rocknroll Ranger ($6) starting from the outside of the front row, and though the gelding hasn't won in awhile she is always reliable for a minor placing. Special Meaning ($6.50) next best.

The big one! Plenty of money, a rug and a prestigious trophy on the line for runners in this $17k race. As always, very hard to bet against a runner when Amanda Turnbull is in the gig, and Fasika ($2.60) is no different. The star filly has four wins and two second placings in her six career starts for Turnbull, and has won at the lightning speed of 1.54.5. Expect that price to shorten come race time. Isobel Ross will line up next to Turnbull in her second runner participating - Sweet Heaven ($3.80). The mare has raced in some strong company in her 19 starts, and can win from anywhere. Karloo Bradley ($19) and Bobby Street ($16) can add some nice value to the multiples. OUTSIDER: Bobby Street will be one of the challengers to the two Amanda Turnbull runners in the Langlands Hanlon Parkes Gold Cup. Photo: KRISTY WILLIAMS.

The last feature race for the evening, there's a full set of harness, hopples and a rug on the line in addition to $13k in prizemoney for these horses yet to break their maidens. Forbes Harness Racing Club president Lex Crosby bred Lexys Got A Reason ($1.85), and the gelding has already been backed below even money after some solid runs for the Bernie Hewitt stable, and scoring the gun draw. He'll be a popular winner, and has plenty of talent. Parkes runner Dead Eye Tiki ($31) is an intriguing runner. Trained by Andrew Ward, the gelding has racked up the trial wins, and hasn't disgraced himself in two career starts. Nice value. Throw a blanket over the rest.

Good luck picking a winner in this one - it is very open and will no doubt be very entertaining to watch. We've got a big soft spot at the Parkes Champion Post for Lou Cee ($51), and despite a couple of disappointing runs of late, the Sportswriter filly has always been great value for punters. Will Cassell will hopefully have her steaming wide down the straight and be in the finish. Whiskiesonthebeach ($9) loves the Parkes track, and Greg Rue will no doubt find a good spot on the inside, while Steph ($1.75) has been racing in some good company.

Yareadfreddy ($1.55) will start as the short-priced favourite for Mark Hewitt after winning a trial in Young in 1:59.9. Not great value but has shown far more class than any of the other runners in his short career. The value probably lies with Nathan Turnbull's Diggers Shed ($9.50), who is still pumping out the wins as a 110 start 10-year-old. He'll need to find a couple of lengths, but in an open field happy to go with the value, and his considerable experience.

Odds correct from 11am at TAB.com.au. Please gamble responsibly and most importantly, HAVE FUN!

Our journalists work hard to provide local, up-to-date news to the community. This is how you can access our trusted content: