You had better believe we are excited for the Aussie Backyard Bird Count (ABBC)!

The count, set to take place from October 18 - 24, is in its eighth year and takes contributions of more than 100,000 citizen scientists to create a snapshot of the state of Australia's backyard birds and the population of different species according to BirdLife Australia's national public affairs manager, Sean Dooley.

"With more counters taking part every year, the picture we are building becomes more accurate and reliable," he said.

"More counters in rural areas will also allow us to compare how birds are faring in the city as compared to out in the bush and the rest of the country."

Across Australia in 2020, the most recorded species was the rainbow lorikeet, with more than half a million counted.

So let's all do our part as citizen scientists to create a snapshot of our winged population.

It's easy - all you have to do is download the Aussie Backyard Bird Count app or complete the form online at https://aussiebirdcount.org.au/

No shades of grey here, this group is black and/or white. What they lack in colour though, they make up for in elegant beauty and intelligence.

Appearance: These black and white warblers need no introduction. Brown eyes, primarily black body and a long beak, perfect for reminding you who's boss when protecting their kin.

Habitat: Where aren't they is probably the easiest way to describe their habitat. About the only place in Australia you won't find them is in the middle of the desert. 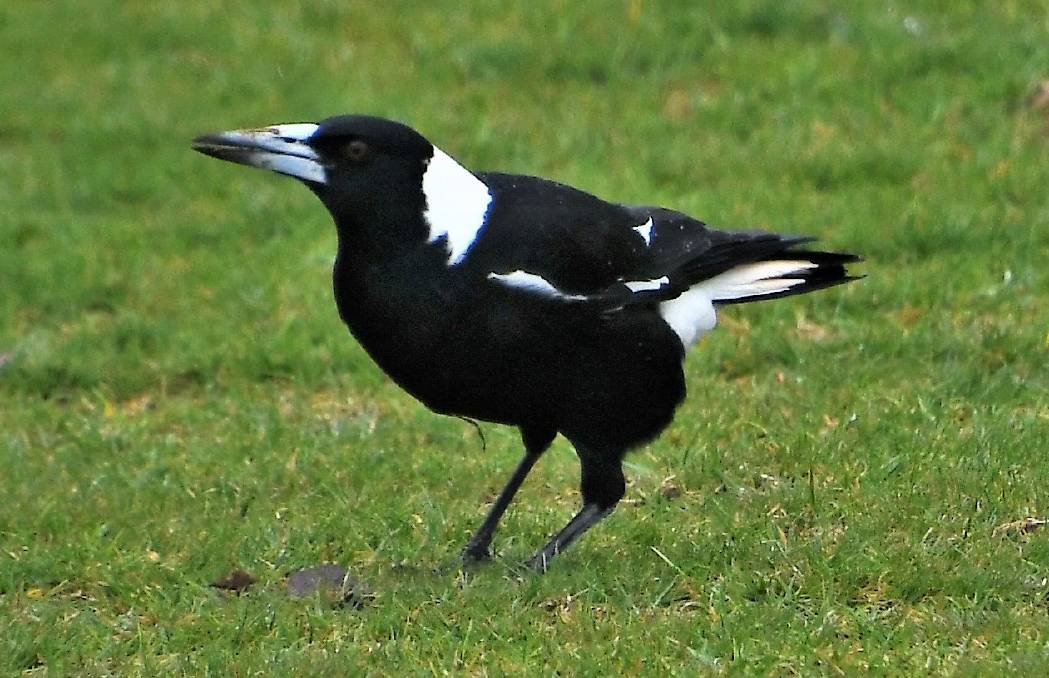 A magpie searches for food in Parkes. Photo: Jenny Kingham.

ICONIC. I wonder how many sporting teams in Australia are named after this Swoopy McSwooperson?

Swooping aside, these birds are incredibly intelligent - and will remember people, whether they register them as a threat or a friend. 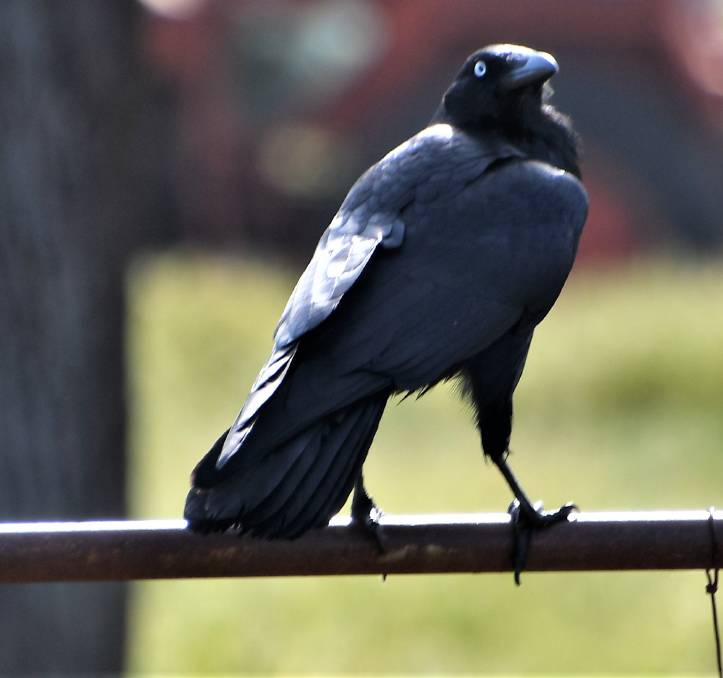 Farmers will often spot ravens, like this one in Tichborne. Photo: Jenny Kingham.

Appearance: Glossy black with piercing white eyes that see right through you.

Habitat: Found all across the nation in almost every type of habitat barring the very arid areas of Western Australia.

A raven's cry is unmistakable, and according to Birdlife Australia the population has boomed because of 'the proliferation of our materialistic, disposable society.' Appearance: Funnily enough, the Blackbird isn't always black. The male is a small black bird with a orangey-yellowy bill, while the female is a streaky brown colour with a brown bill.

Habitat: You can find these little guys anywhere, from trees to roads to gardens.

These birds are some of the prettiest birds you might spot in your count and are usually accompanied by plenty of chirping!

Appearance: An unmistakable and stunning combination of rose-pink, grey and white.

Habitat: It's probably one of the most abundantly occurring parrots in Australia, and found principally in timbered areas. 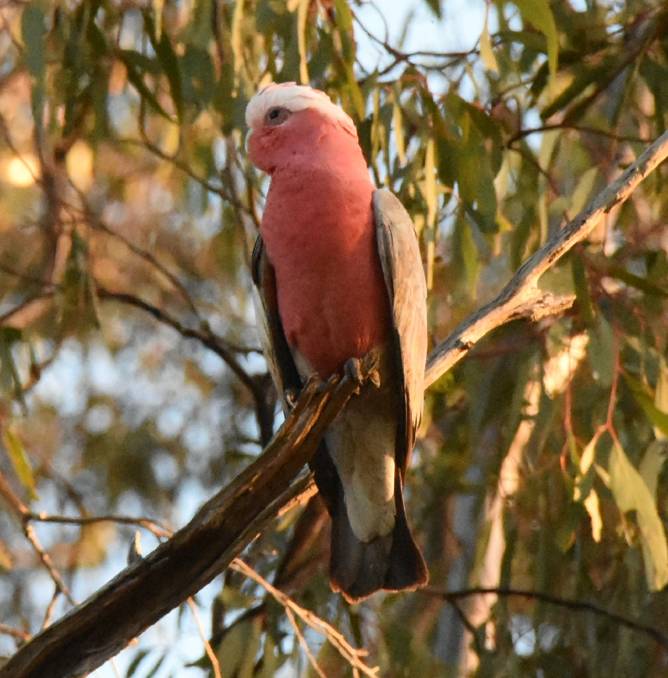 Galahs can often be spotted in a trees in huge flocks, like this one just east of Parkes Photo: Renee Powell.

You'll probably hear a flock of galahs before you see them!

They congregate in huge groups sometimes, but also travel in pairs across towns and farm land in search of food.

According to Birdlife Australia, they form permanent pair bonds until they die *insert crying face emoji*.

Appearance: Grey beak and wholly white body, with a delightful splash of yellow on top that can be somewhat adorably raised or lowered.

Habitat: They are very common around human settlements and timbered areas across northern and eastern Australia. 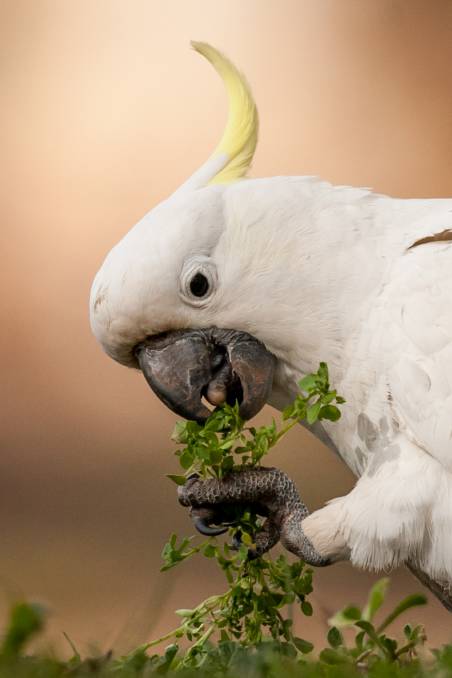 How can you not love our delightful cockies? Photo: FILE.

Cockies are a favourite of ours: a brilliant blend of smart, cheekiness and stubbornness.

You could spend hours wiling away the hours on YouTube watching funny cockatoo videos.

All jokes aside though, they are very lively and affectionate birds who can bond very closely with humans.

They can tear your deck to shreds with their powerful beak, though.

Appearance: All the colours of the rainbow! Eastern Rosellas have a red head, with yellow, blue, green and brown shades all over the tail, wings and body. Just adorable little parrots!

Habitat: You can spot these guys all over town throughout eastern Australia, and in farmlands and bushland. 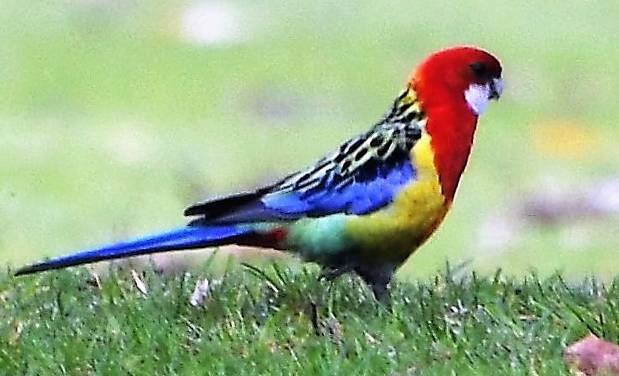 Another bird that will mate for life. We knew we liked them!

You'll often find these beautiful birds feeding on the ground all through town, farmland, the Parkes Golf Course and bushland.

They're a bit quieter than the squawky galahs and cockies, too.

They might not be big...but there are a lot of these birds around Parkes and Forbes!

These are some of the more common birds you might be counting - but watch carefully because they will dart all around the place in the blink of an eye.

Appearance: Very small bird with a white belly, black plumage and long black tail. You might even notice white eyebrows if you're close enough.

Habitat: Found all throughout every habitat on the Australian mainland. 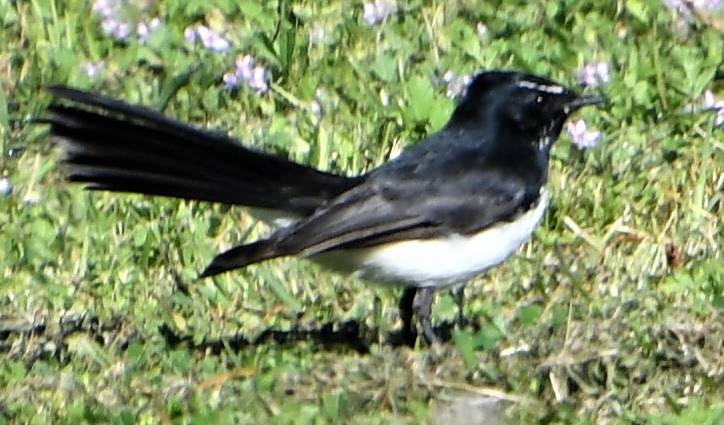 Willie Wagtails are some of the most common birds counted in Parkes. Photo: Jenny Kingham.

Full of personality! These little fellas literally wag their butts (read: tail) as they go about their business foraging on the lawn for insects.

Appearance: Much smaller than a magpie, a peewee has a small black and white body with an almost translucent bill.

Habitat: Found equally in urban areas, farmland, forests and gardens all across Australia. Peewees, like this one in Tichborne, aren't afraid to let you know who is boss! Photo: Jenny Kingham.

The Magpie-lark, which is better known by its 'Peewee' nickname, obviously somewhat resembles a mini magpie.

Though small, they'll will defend their nest vigorously, and you'll know when one is near by the melodious peewee call. 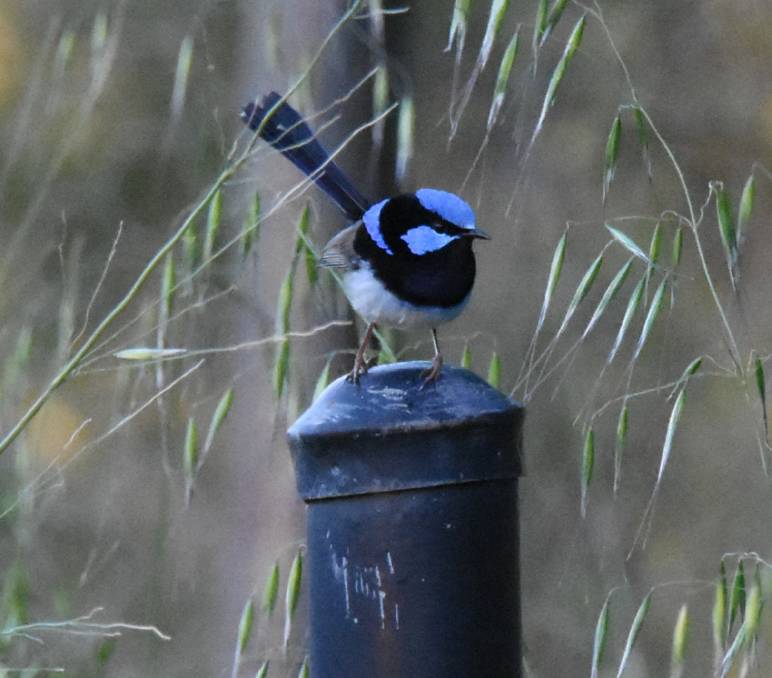 The electric blue of a Superb Fairy-wren can be spotted in a lot of areas around Parkes and Forbes. Photo: Renee Powell.

Appearance: A very small bird with an electric blue and black plumage, black beak, grey body and long tail. The females and chicks aren't quite as eye-catching: they are brown with an orange beak.

Habitat: They love low shrubs and gardens - anywhere with a bit of colour.

Just stunning birds, who recently were announced as the prestigious winner of the 2021 Australian Bird of the Year.

You'll often see the brilliant flash of blue darting around in your garden, with their little butts wagging in the air.

These city slickers have opted for a tree change, though they are found abundantly all through our towns, region and nation.

Appearance: Those devilish yellow beaks, eyes and legs of the Common Myna are synonymous with living in Australia. They have a black head, brown body and white patches on the underside of their wings.

Habitat: Introduced from Asia, these pests thrive in human habitation and can roost in massive numbers in large trees. 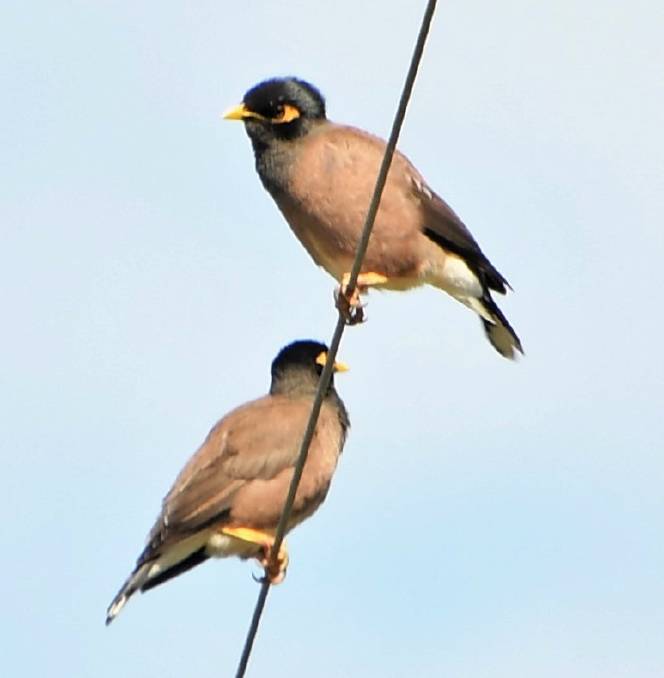 Mynas are a common sight in town. Photo: Jenny Kingham.

Appearance: Black, erect crest on their head, red eyes and mostly greyish-brown body. Some light pink underparts and black bars on their wings. 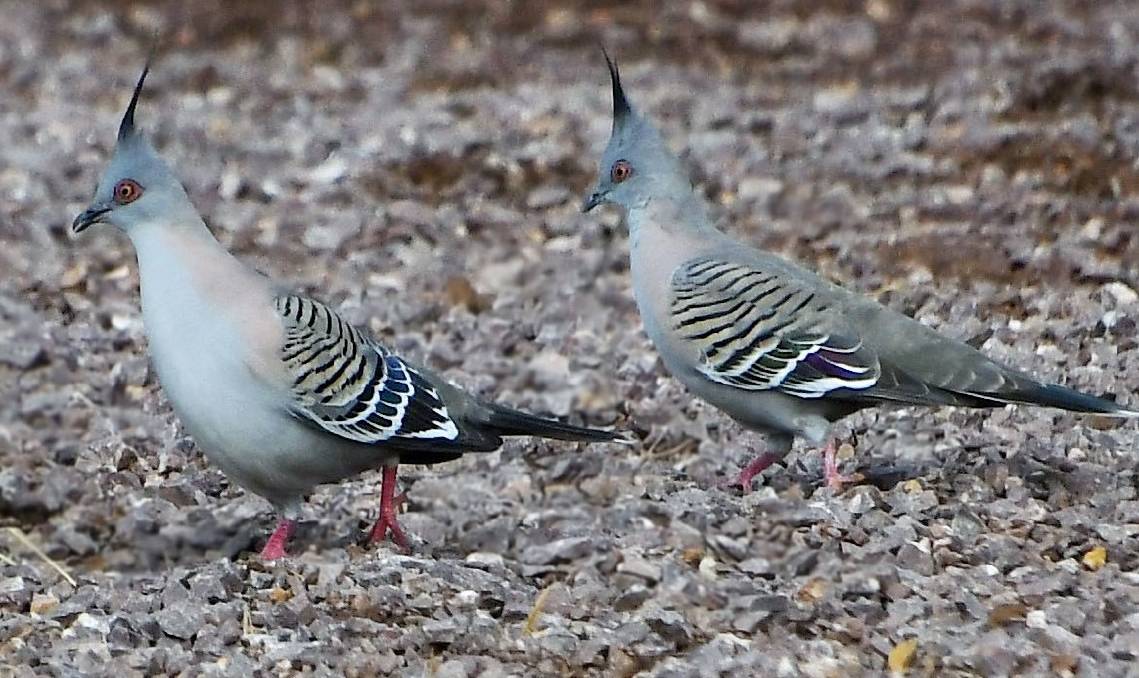 Another bird that has made a nest in the Parkes Champion Post's home office Jacaranda tree, these pigeons were once only found inland in arid areas - but are now abundant all over Australia.

Easily identifiable by their Alfafa-style mohawk (or erect crest, if you want to be scientific).

Habitat: Often on the ground in a group, in open, dry forests. Found all through eastern Australia. 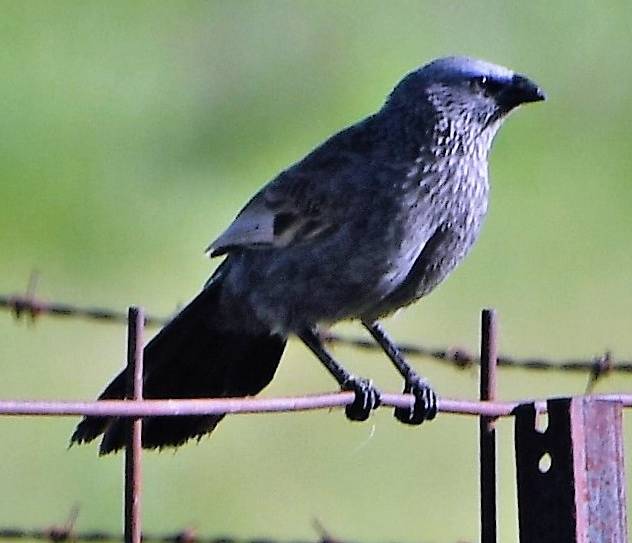 Apostlebirds are a common sight around Parkes. Photo: Jenny Kingham.

You'll often see them in groups of up to 30, according to birdlife.org.au, and they make plenty of different calls.

If you're lucky enough to have one in your yard, put the kettle on and just sit and watch. They're fun.

Here are some birds of prey that ustwitchers get rather transfixed by.

You're more likely to find these phenomenal athletes on farmland outside of town.

Appearance: It's a medium-sized raptor that looks a bit shaggier than some of its cousins. Primarily brown with lighter underparts that resemble an M when flying.

Habitat: It's common across mainland Australia near roadsides, farmlands and wooded areas. As the name suggests, these kites will let out a beautiful clear whistle and love nesting in a tall tree as they survey the region for prey.

Majestic to watch in-flight, the speckled brown stands out when they are cruising through the air.

Appearance: With a wingspan of 2.3 metres and a characteristic wedge-shaped tail, this blackish-brown eagle will get darker the older it gets, though females may be a lighter shade of brown. Brown eyes, cream bill and a top weight of 5.3kg. Wow.

Habitat: Found all throughout Australia and southern New Guinea, they'll usually stick to open country or timbered habitats and make their nest in the tallest tree in the area. If you're wondering whether an eagle is a Wedgie or not, it's not. Once you see one, there's no mistaking it.

The hairs on the back of your neck will stand up, and you won't be able to take your eyes off our nation's largest bird of prey.

Appearance: Pure white head and body, and, as its name suggests, black shoulders. They have beady red eyes and black wing tips. Majestic! 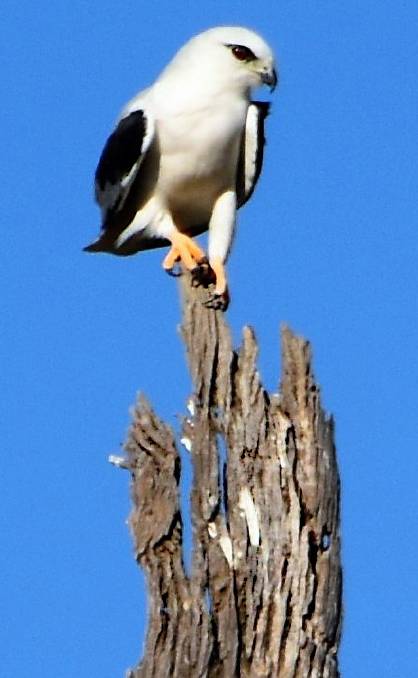 You might understandably mistake one of these for a sea eagle, but they are a reasonably common bird of prey around the region.

They love rodents, so hopefully they can help keep the mouse trap bill down this summer!