After a tight tussle in the First Grade match at Lawson Oval last Sunday the Molong Bulls defeated the Grenfell Goannas 36-12 and in doing so they were able to hold onto the Ian Hanrahan memorial shield.

The shield was presented on the field after the completion of the First Grade game to Molong captain/coach Todd Barrow with Ian's parents and daughter in attendance.

Conditions were not conducive for good footy with constant drizzle, a boggy playing surface and the mercury only climbing to nine degrees.

The conditions did not deter another good crowd showing up and earlier in the day they saw Molong win the Youth League match 20-10 and the locals take out the League Tag game 18-0.

The first try-scorer calcutta winners on the day were Toby Barons $180 for League Tag and Kyle Norris $300 for First Grade whilst Stephen Ingram took home $100 for holding the winning double.

NO WOODBRIDGE CUP GAMES THIS WEEKEND

On Tuesday evening and due to the evolving COVID issues in Central West NSW the NSWRL has instructed that there are to be no Woodbridge Cup games this weekend or training.

The recommendation to the Woodbridge Cup board is that all games across all grades will be draws with each team getting one competition each.

The team with the bye will get their two points.

This was a close encounter with Molong only sealing the deal with a try in the last minute of the game to run out 20-10 winners.

Earlier in the match Molong led 10 nil then Grenfell responded with a converted try only to see the Bulls score again and the visitors went to the break in front by 16-6.

Although the Goannas were dropping plenty of ball they were able to fight their way back into the match and at 16-10 down they looked a chance of snatching a draw when they had a great attacking opportunity with only 5 minutes left on the clock.

Molong held on but it was another top effort by the young Goannas who again had no reserves to call on.

Clay Cusack had a big game picking up the players player and the best and fairest points.

Other good performers for Grenfell were:

Dylan and Bailey scored our tries and Jaxon Greenaway knocked over a conversion.

The Girlannas remained unbeaten this season when they were able to keep the Molong Bullettes scoreless while scoring 18 points of their own.

First half tries to Chrystal Hucker and Lily Holmes saw the locals lead by 8 at the break after a tight first half.

This match was still up for grabs going into the second half but after Zoe Gavin scored and Faith White goaled from wide out with a heavy ball the Girlannas shot out to a 14 point lead.

This was a relatively big lead given the conditions and although Molong tried hard in attack through fullback Katie Fulwood and Libby Peschka they weren't able to breach the Grenfell defence.

Grenfell finished off the scoring when Lily Holmes went over for her second try of the day.

Zoe Gavin was voted the players player and she used her speed during the game to shut down some dangerous attacking raids from Molong.

For the first 70 minutes of this match and with Molong leading 14-12 it was anyone's game however in the final 10 minutes the Bulls swamped the Goannas scoring four tries to record a 36-12 victory.

If there ever was a game where the score-line did not reflect the closeness of the match this was it.

Team Manager Mark Horne said the boys had a massive dig and it was made all the more meritorious when you consider we only had 16 players and this included three Youth League players who had slugged it out in the mud a couple of hours earlier in a tough encounter.

The first half saw Molong lead 10 nil after 20 minutes but the Goannas dominated the next 20 and after Jai Purdie scored the locals went to the break down 10-6 but with some momentum.

This momentum continued into the second half and the Goannas hit the lead at the 50 minute mark after Ty Ashe scored from his own short kick.

At this point Grenfell appeared to be on top but they just could not cross again and obtain the all important 8 point buffer instead it was Molong who scored out wide and went to a 14-12 lead.

For the next 15 minutes play went from one end of the field to the other with both teams knowing the next score would be crucial and it was the visitors who achieved this and they pressed home their advantage in the remaining 10 minutes. 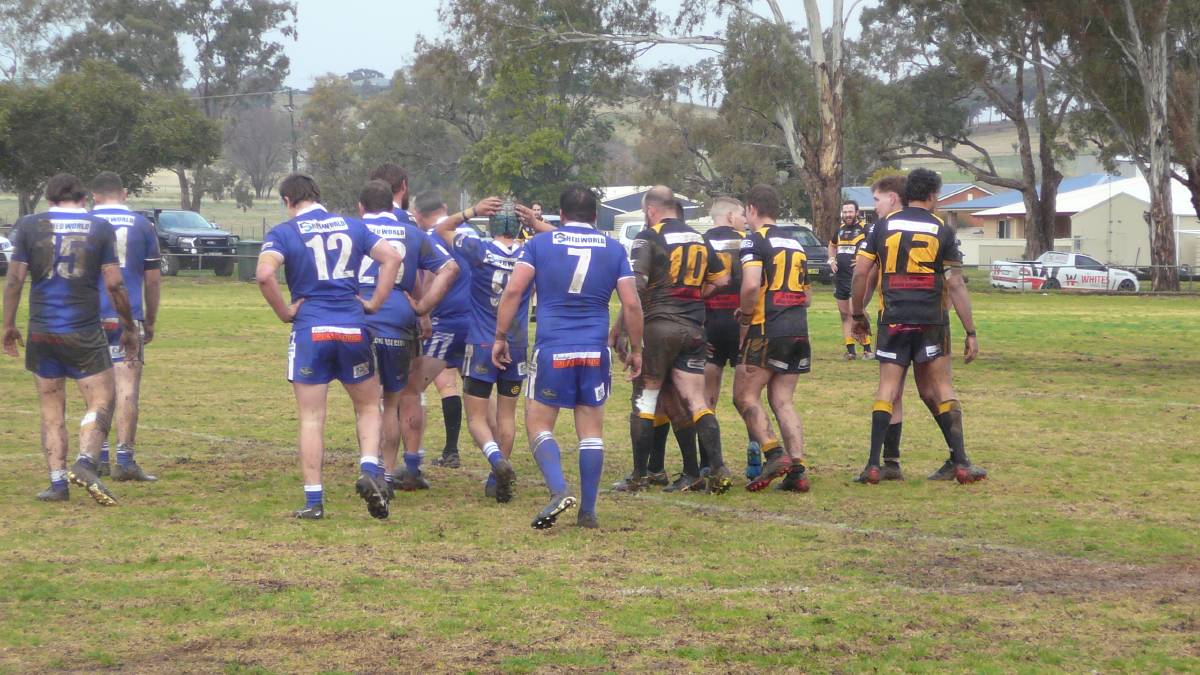 Last weekend the Panthers travelled to Cootamundra to take on the Tri Colours. This was always going to be a tough game playing Coota who sit in second spot on the ladder at their home ground.

This game was played mainly in the forwards due to the wet and muddy conditions. These miserable conditions made handling the ball very difficult, especially in the scums and line outs.

Considering the conditions the Panthers played some good football against a well drilled side with a larger forward pack.

This forward pack showed incredible defence keeping the Panthers stuck in their 22 for large parts of the game.

Cootamundra went on to be rewarded with a well deserved win in a tough game. The final score was 41-0 to Cootamundra.

Coach Dixon was very pleased with the efforts of the team.

With a list of players out due to injuries and other commitments the Panthers were able to take a strong squad of 22 players to Cootamundra, who gave 100 per cent on a tough day of football.

The Coach also wished to thank Bailey Lawler who played very well for his first run at half back in these hard conditions.

This weekend the Panthers take on the Harden Devils in the last home game of the year. It is a special day as it is Ladies day and Sponsors day.

Sam Taylor will be raising funds for The Toll Ambulance Rescue Helicopter Service on the day. The Bathurst 1000 and Brumbies ticket raffles will also be drawn on the day.

Come on down to R.B Bembrick field for a great day of Rugby. Full bar and canteen will be in operation.

All Covid Safe regulations will be enforced. Any enquiries please contact Joshua Taylor 0427951125.

Tuesday afternoon is the day you can come along to the Grenfell Bowling club and join in on the fun playing indoor bowls.

The players were Thelma's team of Ruth and Nerida.

Carolynn's team of Jenny and Barbara.

John's team with Jeannie and Eric.

Shane's team of Coral and Alice.

Thelma skippered her team for 2 wins with John leading his team for 1 win.

The following Tuesday we were required to wear masks and distancing rules did apply due to covid.

This restriction did not deter 5 players having a great time being able to practice bowling techniques.

July started with 10 players rolling up to bowl. The players were Pat, Eric, Joan, Coral, Jenny, Thelma, Alice, Shane, Ruth and Jeannie. Thelma once again led her team to 2 victories with Jeannie's team being runner up. Tuesday 13th July, 9 players formed 2 teams. Joan skippered her team of Eric, Alice and Coral for win over her son, Shane's team of Jenny, Thelma, Alan and Ruth. It is beginning to be a wet and cold winter but you do not have to sit alone at home. Indoor Bowls is one of the best games to enjoy at any level of ability and fitness. It is not competitive as the games are played socially and in comfort. - RUTH STEIN