In hotel rooms in Sydney, thousands of travelers arriving from overseas are bundled away behind locked doors.

They are watching television, making video calls to their families, keeping children busy with toys and episodes of Bluey, and doing yoga on a patch of carpet (if they have one).

A lot of them are resigned to the NSW hotel quarantine requirement, which has so far seen 86,000 people trapped inside for 14 days after arrival.

There's no doubt international arrivals have accounted for the majority of COVID-19 cases in NSW, and hotel quarantine has helped manage them.

But - in light of both the National Hotel Quarantine Review recommendations to seek alternatives, and Premier Gladys Berejiklian's admission last week that the system is "under pressure" - it's hard to escape the thought that the program is past its use-by date.

One NSW family, who arrived from Taiwan last week, agrees, and wants to draw attention to the unnecessary trauma that hotel quarantine is inflicting on already overwhelmed returning travelers.

"We're not saying we should be treated differently - we know there are others in really awful situations," said Charles and Fiona, whose surname we have not used.

"But we're hoping that by speaking out, the Health Department will start to show more compassion and common sense across the board."

Charles and Fiona traveled to Taiwan - perhaps the gold-standard in coronavirus management, who haven't had a locally acquired case since April - to pick up their newly adopted 11 month-old daughter.

In Taiwan, as in many other countries, citizens and permanent residents are permitted to self-isolate using tracking systems.

They traveled with their six year-old son (previously adopted from Taiwan) as it wasn't an option to leave him for such a significant length of time.

"We were also informed by adoption experts that the mental health impacts of leaving behind an adopted child, with his own history of abandonment and trauma, as we bonded with our new daughter would be extremely detrimental to his well-being," Fiona said.

They said that either choice was going to be very hard on their son. And they decided, along with the expert advice, for them to all stay together as a family.

Nevertheless, the experience has severely affected their little boy's mental health. Added to the trauma inherent in the life of their previously institutionalised daughter, Fiona and Charles have found their own mental health tested to extremes. 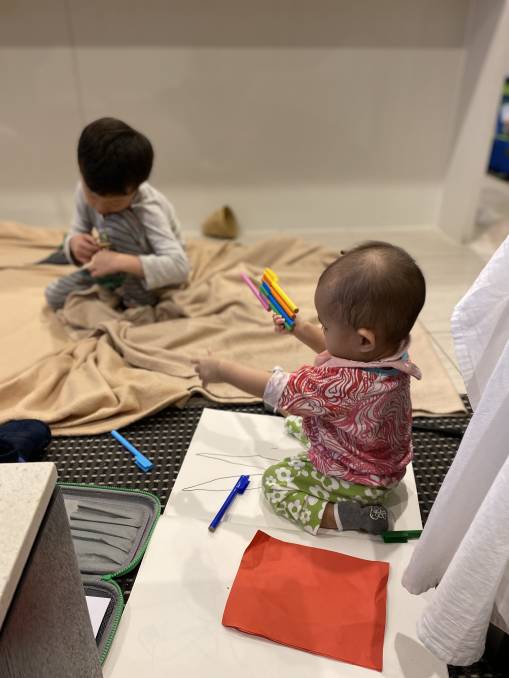 The two children play on the floor of their hotel room.

"(Our son) started complaining about feeling like he can't breathe," said Fiona.

"He has been scared about 'hearing songs and voices in his head' for the past few weeks.

"He said the voice keeps repeating the same jumbled word and is getting louder. It is heartbreaking to watch him go through this."

Before leaving Australia, Fiona and Charles applied for a hotel quarantine exemption on compassionate grounds on the recommendation of adoption and medical experts. Adopted children have experienced trauma and so many disruptions it is considered essential to get them to their new forever homes as soon as possible.

The request to self-isolate was denied. They requested a review with expert support documentation regarding their son's mental health.

On the eve of their departure from Taipei, the couple was frantic. They were attempting to bond with their newly-adopted daughter, while managing their son's worsening mental health, ahead of a long international flight and another two weeks of quarantine, and a response from the NSW Health Department's Quarantine Exemption Unit had still not materialised.

On arrival, they were informed the appeal had been unsuccessful and the exhausted family entered hotel quarantine.

"The only real reason they gave for turning down the appeal was that we had transited through airports, but we only came into contact with people from our own flight, who all came from Taiwan," said Charles.

"Yet if you come from New Zealand, you transit through the same airport, but don't have to quarantine."

He added that lumping all overseas arrivals into the same high risk category is a waste of quarantine spaces and resources.

"It shouldn't be a one size fits all," said Charles.

"Staff here have a greater chance of having COVID than recent arrivals like ourselves from countries such as Taiwan.

"It is an absurd response."

Fiona said that on arrival it became apparent that their review paperwork hadn't been correctly processed - their son's name hadn't been added to their application and his situation apparently not assessed.

"It has been over a week since I first alerted them to their error in our assessment. There are no avenues to lodge a complaint and no pathway to escalate errors quickly.

"The system is broken. People are vulnerable in quarantine."

Charles and Fiona said that they would be happy to wear a surveillance device and follow every protocol to the letter if it allowed them to isolate at home.

"The more people they let isolate at home - especially if they have been to a low-risk country like Taiwan and agree to tight controls - the more room there is for stranded Aussies in hotel quarantine," said Charles.

Australian Community Media requested a comment on the family's situation from the office of NSW Minister for Health, Brad Hazzard.

In response, a NSW Health spokesperson said that the department couldn't comment on individual cases due to privacy concerns, but that "balancing the need to keep the community safe with the needs of individuals returning from overseas is of the highest priority."

"NSW Health data show more than half of COVID-19 cases in NSW were overseas acquired and as such, hotel quarantine is a difficult but necessary safety measure," the spokesperson said.

"NSW Health and other government agencies make available medical, mental health and wellbeing supports for those staying in quarantine to ensure their stay is as comfortable as possible.

"Exemption requests are taken very seriously, particularly those on compassionate grounds, and time-sensitive requests are processed as quickly as possible by a dedicated team of clinicians.

"Exemptions may be granted following a rigorous analysis of the circumstances of each case against the risk to the public.

"Only a small portion of the total exemptions granted allowed people - subject to strict conditions and compliance checks - to serve their full quarantine period in an alternative location to the hotel quarantine system."