It was described as the biggest event in the history of Parkes since the discovery of gold brought the town into being, according to the Parkes Champion Post on August 14, 1958.

Ted Clarke didn't realise it at the time but when he was having early discussions with the Commonwealth Scientific and Industrial Research Organisation (CSIRO) of the possible placement of a giant radio telescope in Parkes, he would be part of something extraordinary and historic.

While the mayor of Parkes at the time Arnold Cecil Moon and the town clerk Alfred E Fox - and of course the farmer whose land the telescope came to be constructed on, A J Helm - were all instrumental in bringing the telescope to the area, Parkes Municipal Council staff too played a part.

Mr Clarke, who many knew by the nickname "Plugger", was the council's building inspector - a role he remained in for 35 years.

Mr Clarke - now 91 years old and living in Sydney closer to his son Gary - was born and grew up in Parkes, and is the son of Wallace Clarke, who was mayor of Parkes from 1941 to 1946.

He remembers that day fondly and those that followed when CSIRO engineers from head office arrived in Parkes.

Mr Clarke wanted to share his story when the Parkes Radio Telescope made headlines again in August for its addition to the national heritage list.

"This is the true story of how the site for the telescope was discovered," he said.

"The town clerk, Mr Alfred Fox, my boss, called me into his office and introduced me to two men who had driven from Canberra and were from the CSIRO, looking for a site for a radio telescope which basically required a background of mountains and a large area of land to avoid vehicle traffic noise.

"They told the town clerk they had driven a short distance along the Wellington Road and had observed land which may be suitable for their purposes."

But Mr Clarke said they didn't disclose much at first, just that they were interested in an area in the Harvey Ranges and about how much traffic past by.

"I am of the opinion that the discovery of the site was an accident and that they were probably on their way to Wellington, which has similar mountains and terrains as Parkes," he said.

"But they say that luck is worth a fortune, which I can only agree with."

According to the 1958 article, it was originally intended the Australian telescope should be within a 50-mile (80.5km) radius of Sydney, providing easy access to the Sydney laboratory.

But because of the highly industrialised areas in close proximity, the CSIRO decided to go further afield.

"The town clerk gave me a parish map which would indicate the names of the owners of the properties and the land areas," Mr Clarke said.

"They asked me would I come with them because they got a bit lost... They said they'd 'seen it but we lost it'... We travelled a few miles out along the Wellington Road.

"We all know where now but it was a different area then, it was an earth road and they pointed to the area they were interested in.

"The men talked for hours regarding the site and it was obvious they were excited in respect to its potential.

"I'd never seen a big telescope, I thought it was something you put in your pocket! ...I didn't know what they were talking about.

"We returned to Parkes about 5pm and I remember it was a Sunday in the 50s, a steaming hot day and we all had a drink at the Commercial Hotel, which [at the time] was located opposite the Council Chambers." 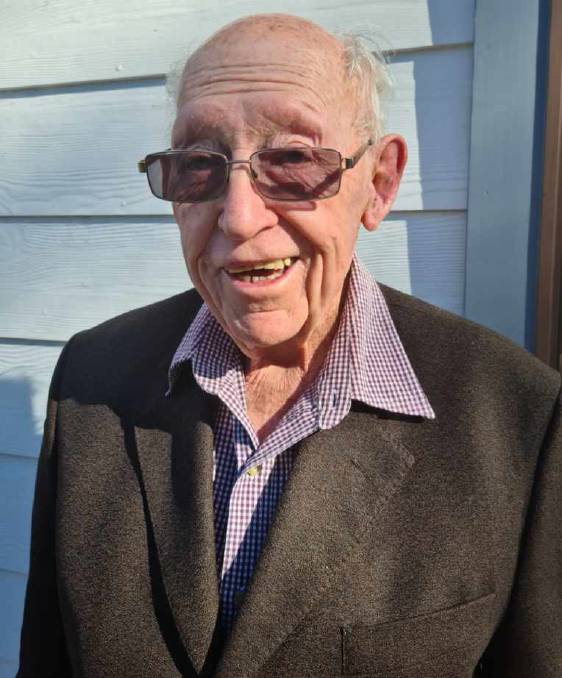 Mr Clarke said he was told other countries had a "definite interest" in the structure and the money - £500,000 to be exact - was already "in hand" for this project as soon as the site could be found.

"The town clerk told me this was strictly confidential and that this telescope would be as high as the tallest building in Sydney - 250 feet when completed.

"I know it doesn't sound much today but in the 50s it was a big show... They had never built anything like this in Australia.

"It's hard to keep something like that a secret in a country town!

"They (CSIRO) told [Mr Fox] the site was ideal and that they would not be looking elsewhere.

"It appeared to me they didn't want anything more than the Harvey Range, it fascinated them, it's a beautiful range... They knew what they wanted.

"It was just luck, something so big for a little town, generally those things get away on you."

The CSIRO representatives returned to Parkes a few months later, once gaining approval to acquire the site and to begin negotiations with farmers to purchase the land.

Mr Clarke said Mr Fox offered to carry out the negotiations since he knew the owners personally.

"All I heard straight away from [the owner] was 'it's over, it was so easy' and he said 'they were so glad Parkes would get something big'," he said.

"It went so smoothly when you consider what a gigantic thing it's turned out to be.

"My only contact with it after that was the opening of it." CONSTRUCTION: The Parkes Radio Telescope in its very early days of construction in the Coobang Valley, formerly A J Helm's property. Photo courtesy of Scott Helm.

CSIRO purchased 400 acres of Mr Helm's flat grazing country - set in a valley floor and north of a range of hills forming a spur of the Harvey chain which protects the site from possible electrical and industrial "noises" from Parkes.

To give the radio telescope adequate isolation from motor traffic, Goobang Shire Council applied for and obtained permission to close a road in the area which served seven landholders.

"So sensitive will be the radio telescope that no traffic will travel within two miles (3.2km) of it, except at certain times," the August 14, 1958 article read.

It's also the reason why no industrial expansion has occurred north of the town, a commitment from the Municipal Council.

At the time Mr Fox said the ideal position for industry "which was sure to come to Parkes" was to the south of the town, where railway facilities were at hand and there was ample water supply.

The Parkes Observatory Visitors Centre came in February 1969, when the number of visitors curious to learn about the work conducted there became so great they were almost unmanageable.

On the evening of August 13, 1958 the Minister for CSIRO R G Casey announced in Federal Parliament that Australia's giant radio telescope would be built in the Coobang Valley at Parkes.

It was to be the largest single piece of scientific equipment in the southern hemisphere and the second largest in the world, to be used by scientists from around the globe.

The announcement followed years of investigation and Australia-wide surveys.

"A lot of people got work, it was absolutely unbelievable," Mr Clarke said of how it benefited the town.

"They never thought they'd see anything like that in a bush town.

"[CSIRO] brought people in from everywhere and brought money into the town.

"We (Mr Fox and Mr Clarke) said to each other after it was over 'just [imagine] what this will be, the town, in years to come...they'll be going to the moon'.

"He (Mr Fox) was excited and he deserved to be excited because he did a mighty job of it."

And to the moon they did.

He remembers a luncheon held in the CWA Rooms, where Big W is now located, with a salad lunch served by the CWA Ladies Guild.

"You can imagine the people who came, they came from all around the world," Mr Clarke said.

"My job was to obtain cars and drivers for politicians who had flown to Parkes and required transport.

"It was important the vehicles be kept in strict protocol order when being driven to the telescope.

"My prime motive in explaining the true story of the discovery of the site for the radio telescope is to pay tribute to the town clerk - Mr Fox - who undertook all the tasks associated with the discovery, the purchase of the site and the organising of the successful opening.

"He was a very good talker, he was the town clerk for 40-odd years, he was respected and everybody liked him.

"He passed away a few years after that.

"[The telescope] was enormous and it was what we and they hoped it would be, it just made Parkes."