MICHAEL Erdeljac has always attacked his role as Cricket Albury-Wodonga chairman head-on. And Erdeljac is adopting the same approach as he and his wife, Anthea, come to grips with her early onset dementia diagnosis. The pair spoke to The Border Mail's BRETT KOHLHAGEN this week.

BK: You love cricket, but you love your wife of 31 years more. Tell us about Anthea's ongoing medical fight?

ME: Anthea was diagnosed just after her 51st birthday three years ago. She started having issues at work where she couldn't get the numbers and figures to add up while she was working for urologist John Russell. I'd go down and help and things would be OK for a couple of days and then it would happen again. After that we were playing cards one night which we have done all of our lives and she couldn't play. It was very emotional. She couldn't tell me that the King of Diamonds was the King of Diamonds. We were gobsmacked.

BK: Where did you go from there?

ME: We have a lot of doctor friends and sounded them out. Rebecca McGowan went through an elimination process including blood disorder and B12 and it took three or four months. We could see things weren't getting any better and then Lorraine Russell said maybe we should check for early onset dementia. We did the tests and went to Melbourne for a week and that's when it all came out.

BK: Anthea, that must have been tough?

AE: It was a big shock and very upsetting. Often I know the answer to questions and names but I can't process it.

BK: I'd imagine it would have turned your lives upside down?

ME: It's been a complete change to us because you have to be patient and that's something I don't own. Patience is a virtue that belongs to women, fishermen and motor mechanics and I ain't any of them. I do think I've come a long way in that regard since Anthea was diagnosed but it's something we are both dealing with. Anthea's nickname has always been 'Vola', which is short for volatile, so she can get pretty frustrated as well. It's been hard on the boys, Noah and Ethan, as well but all you can do is get on with it.

BK: How do you approach day to day living?

ME: Dementia is all about sticking to routines. We are lucky to have had three women in Milla Reid, Paula Zegiel and Lucy Chalmers who help Anthea as I'm always on the phone or away with cricket. Not only are Miller and Lucy great carers, they are good family friends which makes a huge difference to Anthea. I'll say it again, it's all about routines. Anthea gets up at 9am and we go out and feed the horses, then do the cats and dogs and check the water. She loves it, it's her favourite part of the day.

AE: I've ridden since I was really young up at Corryong. I've done a lot of riding and teaching and been lucky enough to have competed in some big events at Werribee and Gawler. I love my horses (Scarlett and Squirt).

BK: You mentioned before how you lack patience, how would you describe your leadership of CAW?

ME: Probably my way or the highway. When we merged Wodonga and Albury and Border and I looked at all the shit that was going on, someone had to take control and make decisions.

BK: Have you alienated people?

BK: I can imagine you butted heads with a lot of people when a group tried to overthrow your leadership in 2010?

ME: There was a lot of angst when I took over. A lot of people had done it their way for such a long time and looked after their own club's agenda. When we merged, I said this was about having 20 clubs and everyone from Mt Beauty to Barnawartha-Chiltern and in between would be looked after the same. It was very heated and there was a lot of back-stabbing, but a lot of credit goes to John McMillan, Neil Gregg and Rhys Miller for sticking to what we had in place. When I got up and said what we had done I think the clubs realised we were heading in the right direction.

BK: You had to fend for yourself as a kid. Do you think that's why you developed such a hard-nose?

ME: It was very tough at home so I left when I was 16. Dad was a Yugoslav and very old school Croatian and, when I say that, the wife had to be five metres behind him all the time. We were brought up that way. I couldn't handle what my father was doing to my mother so I got out. 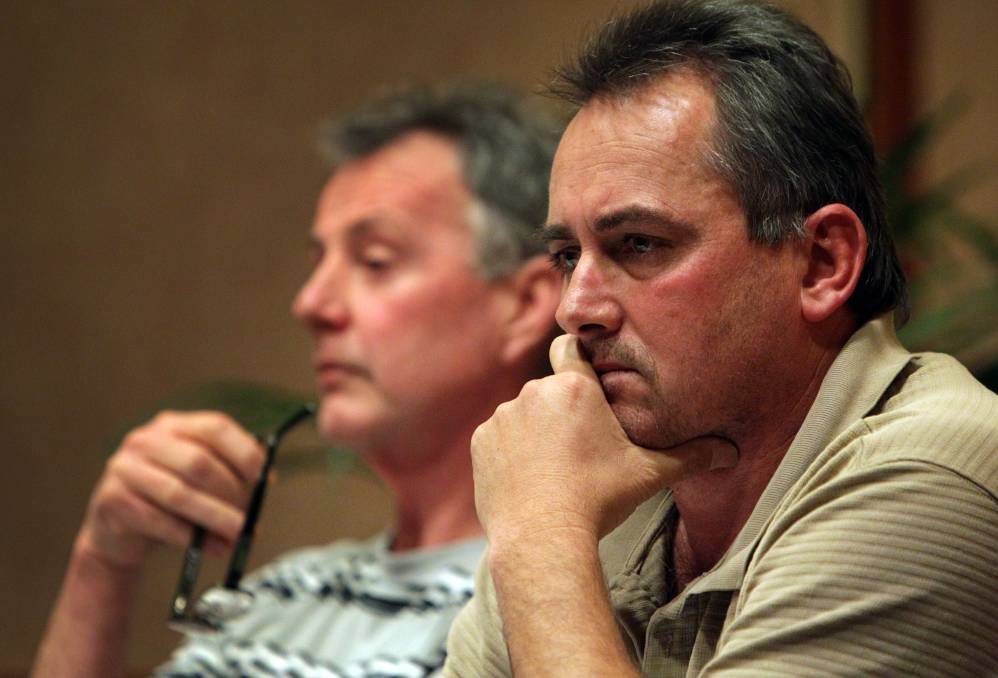 Michael Erdeljac at a meeting in 2010.

BK: You didn't have a strong relationship then?

ME: No. We spoke but to show the arrogance of my father we had Ethan's first birthday party and Tom (father) came here. We let him in the house and he just proceeded to start saying we shouldn't have fairy bread or party ties or be drinking and Anthea warned him to stop it. He said something else so she marched him out the front and said: 'Don't ever set (expletive) foot on his property again". He didn't come back for two or three years.

BK: You developed your passion for punting soon after moving out from home?

BK: What's been your proudest achievement as chairman?

ME: I think bringing the BBL game between Melbourne Stars and Sydney Thunder to Lavington in 2016. We had guys like Glenn Maxwell and Shane Watson playing and 9680 came along on a Tuesday night. It was a long, drawn out process following the guidelines but we got there. What made me so happy was at 10.30pm that night when nobody had left the ground, Glenn Maxwell was there signing a nine or 10-year-old's shirt and the look in his eyes was incredible. The look in the kid's eyes told me we had made it. Playing a WBBL match for officials points here was also fantastic.

BK: How big will theBirallee Park indoor cricket training facility be for the region?

ME: Huge. It's a $2 million project where Cricket NSW and Albury Council are putting money into a facility in Victoria. That doesn't happen too often. To have those two and Sport and Recreation Victoria, Cricket Victoria, Wodonga Council, Cricket Australia and Cricket Albury-Wodonga working on the same project is unbelievable when you think about it. Being on the Border presents challenges.

ME: Well, this region has supplied hundreds of AFL players to the highest level over the years but only a handful of first grade cricketers. Our kids have never really had a chance unless they moved to Melbourne or Sydney. Now our kids can train here, learn from the best coaches and have a real crack at it. We won't see the elite benefits for five years, but if I'm a 13 or 14-year-old cricketer at the moment I'm pretty excited to have this on our doorstep.

BK: How many clubs does Cricket Albury-Wodonga have under its umbrella at the moment? 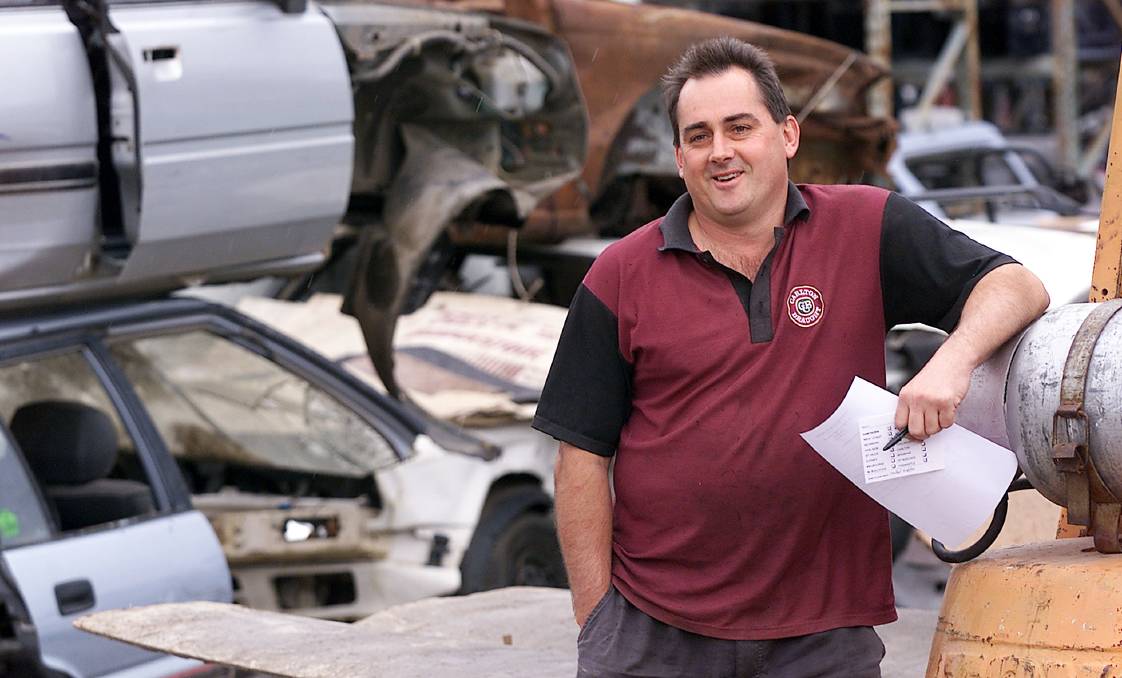 Michael Erdeljac as a West Wodonga Warriors official in 2003.

ME: There are 32. Each weekend we have 3500 to 4000 players and officials from Mt Beauty to Osborne and Oaklands to The Rock-Yerong Creek. It's huge and a lot of people like Robbie Mackinlay and Rhys Miller deserve credit for that. There are 145 sides and that's not counting junior country week teams and the other junior programs. We've worked very hard with all the local councils in regards to grounds and funding.

BK: I would imagine it could be a logistical nightmare at times?

ME: At peak time I'd receive between 150 to 200 calls a day. I'd probably answer 70 to 100 of those. It's not easy but most people know I don't text. I don't have time to do that. Cricket Albury-Wodonga is now a full-time operation for two or three people and we are doing it now with one and a half (Dave Nichols). Our board is fantastic and they do an enormous amount of work as well.

ME: That's a hard question, one of your better ones actually. I enjoy both to be honest. I played over 400 games of footy and I don't think many people have played over 100 games at three different clubs (Walbundrie, Urana and Cudgewa). Probably the thing I'm most proud of is I never played with two sides in the same league.

BK: I heard you were stiff not to win an Upper Murray league best and fairest?

ME: Well, I did win but I was ineligible. I was playing for Cudgewa and a bloke from Walwa grabbed me on the nuts so I broke his nose. I think it was in 1984 or something like that. I think I got 24 votes and David Greenhill and John Bloom were next on something like 14. From memory 'Butch' beat John on a countback.

BK: You had some fun playing footy didn't you?

ME: I loved it. I still remember out at Walbundrie one night we had had a few drinks and got pulled over by a copper at the intersection just out of town on the way back to Albury. Everything was good and I asked him if I could borrow his policeman's hat and car to play a prank on someone who was coming behind us in five minutes. 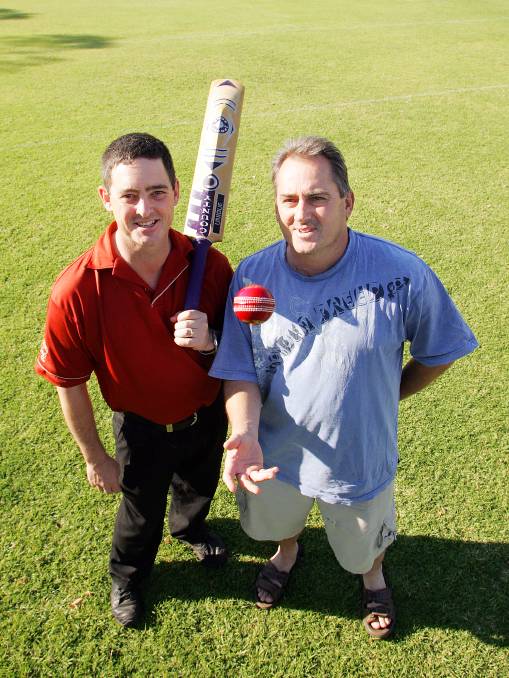 ME: The coach, Ted Miller. I flashed the lights, pulled him over and walked towards him with my head bent forward so he couldn't see my face. I said: 'Gotcha' and Teddy shit himself. He took off in the flash. I had a lot of funny times at Walbundrie, Urana and Cudgewa.

BK: Darryl Jordan oncesaid you claimed to have kicked 200 between you in a season at Walbundrie but you only managed 30. Is that your recollection?

BK: You enjoyed your time at Urana didn't you?

ME: I've been to some weird places before but Urana is right up there. The first time I went out there with Anthea they said would you like to stay for a drink because the previous two coaches didn't drink. Well, I think I got there on a Sunday and left on Tuesday.

BK: Where you much of a coach?

ME: I coached Urana for two years. I probably let the boys enjoy themselves too much but it was the early 1990s and I was all about getting the club back together. We used to have a thing where we would organise a KFC night. I'd drive out with 150 pieces in my car. There were always a few left over for the trip home.

BK: Thanks 'Erdels', you definitely call it how you see it

ME: Always have, always will.

This story On illness, arrogance and leaving home at 17 first appeared on The Border Mail.