FORMER Yarrawonga champion Brendan Fevola has credited the Pigeons for stopping his life from spiraling out of control.

The 2012 and 2013 premiership star said his four-year stint at J.C. Lowe Oval taught him how to live after AFL.

Fevola and close friend Craig Ednie will be attending the function in Albury on Saturday night.

"When I went to Yarra I was in a pretty bad way, in a tough spot," Fevola said.

"Wally Brear, ‘Kea’ (Chris Kennedy), the footy club and the boys treated me the same as everyone else which was great.

"I’m obviously back with my missus (Alex) now and have a new baby.

"At the end of 2015 I remember being on a Mad Monday after losing to Lavington and she rang me and said come home. She later said she would never have done that if I didn’t move to Yarra."

In a wide-ranging interview, the dual Coleman medallist rated the Ovens and Murray as the premier competition in the country outside the AFL.

He recalled being shocked by the ferocity of his debut against Lavington at Mulwala's Lonsdale Reserve in 2012.

"I’ve played in virtually every league in Australia since coming out of the AFL and the Ovens and Murray would easily be the best standard of footy I’ve played in," he said. The ultimate showman: Brendan Fevola celebrates one of his many goals for Yarrawonga. He rates the club's premiership in 2012 as one of the highlights of his career.

BK: Do you remember the first conversation you had in regards to coming to Yarrawonga?

BF: Matty Tripp called me just before Christmas in 2011. I didn’t answer because I thought: ‘Oh shit, what the (expletive) is he calling for because I used to bet with him.’ It was like a year after I’d finished footy and I didn’t know what was going on. Matty sent me a text saying he was having a few beers with Wal (Glenn Brear) after golf at the Vic. They worked out a deal to get me to Yarra from there and it was just like where do I sign? It was all done by the Monday.

BK: Was Yarrawonga a culture shock?

BK: Is there anything that really caught you by surprise?

BF: Everyone always talks about how nice country people are which they are but I didn’t realise how tight people can be, especially Craig Ednie. He never opens his wallet. When you go for a beer at the pub it’s a great atmosphere with people always offering to shout but Caig just disappears all the time.

BK: The club and town played a big role in turning your life around didn’t it?

BF: When I went to Yarra I was in a pretty bad way, in a tough spot. Wally Brear, ‘Kea’ (Chris Kennedy), the footy club and the boys treated me the same as everyone else which was great. They helped me get my life back on track. I’m obviously back with my missus (Alex) now and have a new baby. At the end of 2015 I remember being on a Mad Monday after losing to Lavington and she rang me and said "come home". She later said she would never have done that if I hadn’t move to Yarra. It pretty much got my marriage back on track which was great.

BK: You are still close mates with Wally and the boys aren’t you? 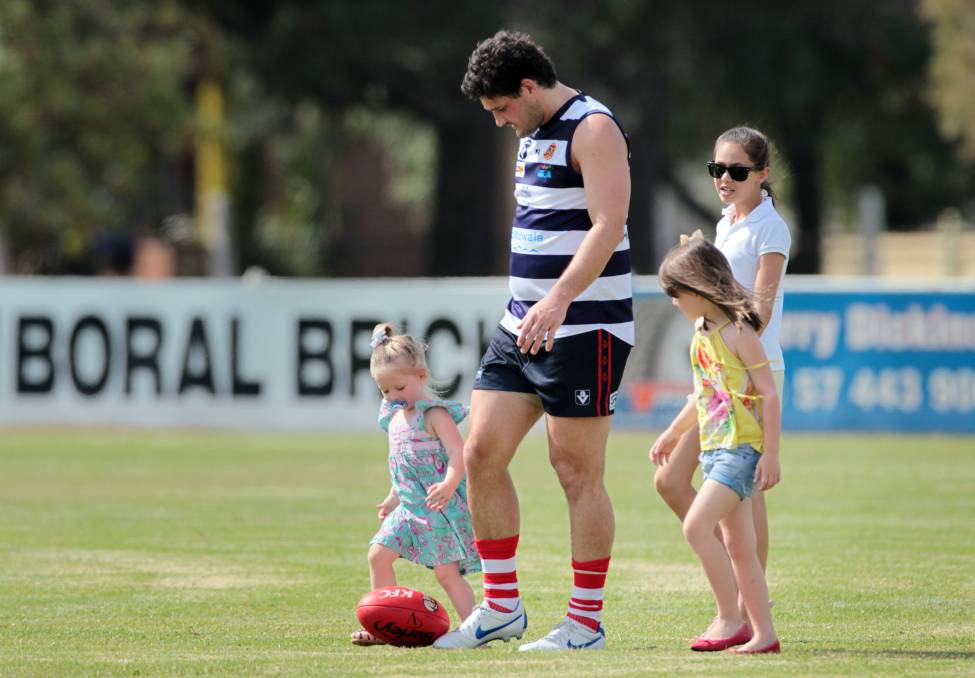 Fevola with his daughters

BF:It was Xave’s (Leslie) birthday the other day so I sent him a message. He’s old, about 60 I think. I caught up with Tyler (Bonat) and ‘Pets’ (Kayne Pettifer) the other night. When you win flags that helps because you share some great times. I’ve been to Yarra a bit and gone out with the boys and I guess that’s just a bond you share for life. It doesn’t matter where in the country or world you are. Wally is a legend.

BK: Did you see many players in the O and M who could have cracked it in the AFL?

BF: It’s so hard to say they could have made it but I did come across come some good players. Pendergast was an absolute star with his ball-winning ability. Brad Murray was a gun and Jarrah Maksymow was good too. Marcus McMillan was a big part of why we won flags at Yarra. Craig Ednie played seven games and he might have played more but Richmond had a lot of small players on their list at that stage. I spoke to Danny Frawley about it once and he said he might have played more if he’d gone to another club. He was just unlucky. Brayden O’Hara was silky and killed us in a grand final coming off the bench and Joel Mackie was a superstar as well.

BK: You’ve always rated the O and M haven’t you?

BF: I’ve played in virtually every league in Australia since coming out of the AFL and the Ovens and Murray would easily be the best standard of footy I’ve played in. It would probably nearly be better than VFL footy. The VFL is different because you have young kids who have just been drafted where the O and M are big men and farmers who are well built.

BK: The physicality caught you by surprise then?

BF: I remember the first contest I saw in the Ovens and Murray. We were playing Lavi at Mulwala and I was standing at full-forward and Craig absolutely cleaned someone up on a wing. Then he got cleaned up and I thought ‘holy ----; as I’d never really seen O and M footy before. They just crashed in at each other. You don’t get those hits in the VFL as it’s more outside footy. The O and M is tough and you need your gun onballers. It’s why Tyler, Xave and Joel Mackie are guns because they go in and get the footy.

BK: How did it make you feel seeing the crowds 10-deep at the J.C. Lowe Oval? BF: Amazing, especially getting into the little caravan park footy ground. To see the ground, canteen and bars full was great. I loved it. It was great for the growth of Yarra’s younger players as it prepared them for the big games. It was great for the club, the league and the businesses around town. Everyone knew who the Pigeons were.

BK: Who would you have rated as your toughest opponent?

BF: I didn’t have one as I used to tear everyone to pieces (laughs). Dan Leslie was a good player.

BK: Is there a stand-out game from your Yarrawonga days?

BF: The first grannie was unbelievable. We were about 50 points up in the last quarter and it went for about 37 minutes. They kicked a few in a row and got within 12 points and I thought ‘surely not’. I thought Albury had someone up working in the timekeeping box. We eventually got there and seeing Drew Barnes and Xave Leslie’s emotion and joy after the game was something I won’t forget. They had finally beaten Albury. We didn’t leave the rooms until 8pm or 8.30pm with the trophy. That was one of my best moments in footy.

BK: Any other highlights?

BF: Going out on the drink before the inter-league game at Albury was a highlight too.

BF: It was a really good night.